To some of you this post may seem somewhat redundant because I already have an “About me” page but since I’m taking part in the WordPress Zero-to-Hero challenge I’m posting a more in depth “about me”.
END_OF_DOCUMENT_TOKEN_TO_BE_REPLACED

I recently visited a tradefair, related to the sector in the webshop that i co-operate, called spoga+gafa. While we always go there to find interesting products to add to our vast catalog of products we sell already, i wasn’t quite thinking i’d find a product like the SteakChamp. Read on for a small review on how this tiny grill-tool simplified the way i cook my steaks…
END_OF_DOCUMENT_TOKEN_TO_BE_REPLACED

Recently I had some soldering to be done on delicate and plated plugs. Normally I use Helping Hands to, for instance, hold the wire and plug. Due to the delicate nature of the gold plating on my plugs, I didn’t want to risk damaging them with the bare crocodile clamps and wanted to cover them. I used some (clear, 4mm) heatshrink tubing that I cut to length and put over each jaw of the clamps and hit it with a heatgun. You do have to keep the clamps open somehow (a tie-wrap works wonders) to prevent the clamps from punching through the heatshrink while it’s hot.

If done right, you will end up with this:

Mouthguards on the crocodile clamps
Still very much a clamp, but much safer for delicate coatings and platings.

Quick edit to a quick mod: it has come to my attention that these are more commonly named “Third Hand” or “Third Hands”.

When I bought my first Mazzer it was incomplete and missed a few parts. One of those parts was the hopper, the plastic container on top of the grinder that stores the beans until they reach the grinding chamber where they will be ground. A key part don’t you think? I thought so too…
END_OF_DOCUMENT_TOKEN_TO_BE_REPLACED

Almost two weeks ago I posted an article on my most recently bought Espresso machine, the Saeco Aroma with a couple of hidden defects. Once things were sorted out with the seller and the necessary parts were ordered I could finally get to work.

END_OF_DOCUMENT_TOKEN_TO_BE_REPLACED

As you might have guessed i snagged up another espresso machine. I was told the machine started leaking water after being descaled and that somehow it wouldn’t switch off anymore. Having seen some of the pictures of the machine before committing to the sale it seemed like an easy fix. When i picked up the package it came in this afternoon it all went south though.

END_OF_DOCUMENT_TOKEN_TO_BE_REPLACED

A little over 2 weeks ago i got my hands on another little project. I’ve been interested in the inner workings of espressomachines for a while now and i was looking for an easy machine to start tinkering with, preferably with as little electronics as possible. I found one on eBay that fit the bill and needed some work.

END_OF_DOCUMENT_TOKEN_TO_BE_REPLACED

With this Astoria badged Mazzer Super Jolly i’ve started a new category on my blog. You will find this and my other current projects under, you guessed it, “Current Projects“. I found this grinder locally on a classifieds website. The seller didn’t specify which brand or model it was, but i recognised its shape immediately. The grinder was cheap enough but somehow it was still listed after being on that site for about a month. When i asked the seller if he still had it for sale i was quite amazed he still hadn’t sold it yet. It did look quite beat up, but these grinders are known to stand up to just about any kind of abuse…

END_OF_DOCUMENT_TOKEN_TO_BE_REPLACED

Apparently Butlers loves Disney. I share that common interest so when i was at a Butlers store in Aachen last week i picked up a new cereal box (yes i managed to contain myself and not buy their entire Disney range). Excuse me for the lousy quality of photography here but i just had to share these. 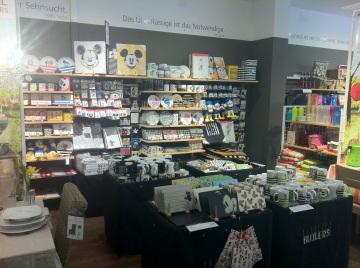 [update] Apparently Disney didn’t like it too much that their latest Mickey Mouse short film ended up on YouTube.com. You can watch the video directly on www.disney.com. There is a possibility that Disney won’t show it to you unless you’re in the United States. If you are in the US and Disney still won’t let you view it, here’s a direct link to the 1080p version: Mickey Mouse – Croissant de Triomphe.

I’ve been a big fan of anything related to Disney for years. This morning apparently Disney released a new short film with Minnie, Mickey and Daisy.

Even though the video is entirely french you don’t need to actually understand any of it to know what is going on, exactly like the older shorts. Obviously the drawingstyle is quite different from the original / older short films and i’m not quite sure that i like it yet, however i do love the fact that Disney is releasing new material again with their original set of characters.

And apparently Disney appreciates pretty espressomachines as well, about 17 seconds into the film there is a quite good representation of a Victoria Arduino Venus Bar.

Obviously Disney holds all the copyrights to their characters and movies / films in this post. Upon request i will delete the direct link to the video even though it is quite easily to find in the source of their page.